Time flies when you are having fun!

So, its been years since I last posted, but I have been watching others post on their blogs and enjoying their results; I have also been caught up in the the whirlwind of other block challenges and have been sucked in...  Yep, in the way that Storm Stella whipped through our otherwise boring winter and made the beautiful picture that is my new background. 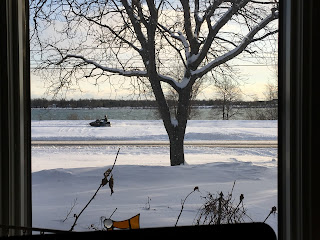 It has also made the front of our house a target for the buzzing noise of snowmobiles.  They go by quickly, usually in groups of two, so I have been able to snap a couple of pictures as they have zoomed by. 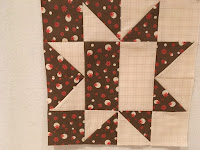 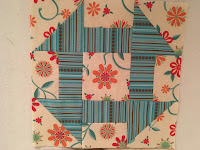 I have done several blocks from Pat Sloan of ilovetomakequilts.com 182 Day Solstice quilt.   With these I am using stash.  I had purchased the fabric back in 2006 and bought a lot of it (mostly 1+ yard segements)  I don't remember why, but I really liked it back then.  I still like it, but its time for it to move out in the form of a quilt.  Therefore, it was my excuse to start something new.

And found an old UFO from either 2004 or 2006.  My mom and I went to a quilt conference and I started it at that time (back in the days before stash).  I screwed up my count on blocks (and didn't cut my diamonds correctly).  Thus could not get a layout I liked, so I just put it into a box. 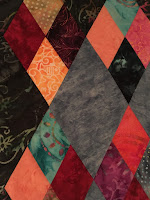 It waited for me and the other day I was overcome with the need to just get it finished.  And I fussed and fussed over the layout, finally I gave in and made a block out of incorrectly cut scraps.  I still have to fuss with the border, but I will have a finished quilt I will love.

And it will leave my home, hopefully as my first completed quilt for Hands2Help.  Yep, sucked into this one too.  I have some quilting projects to complete, but life is not allowing me the time and creative energy to finish them so I will give my creative energy where I can.

Posted by Reneeluvsquilting at 9:00 PM No comments:

I have decided to commit to Drop and Give Me Twenty (DaGMT) 2014.  Here is my commitment statement:


I, Renee who loves quilting, am joining Quilty Hottie Haven's 3rd annual DaGMT eventa nd pledge to quilt at least 20 minutes every day of Feburary 2014.  In choosing to do s  I will complete several project that have been commited to pleople and open by fabric stash and heart to create and complete more.  I think Beth Helfter is brillant for coming up with this concept and inspiring me to join.

So here we go, 20 lovely minutes of quilting a day!

Posted by Reneeluvsquilting at 3:16 AM 4 comments:

I think the pictures this morning did not do justice to the quilt so here are some updated pictures.  Thanks for all of your lovely comments.

Posted by Reneeluvsquilting at 5:11 PM 5 comments:

Wake up to Kona!

That's all I can say about the beautiful work everyone has done.  I love what God puts in each of us.  How different we each are and yet, how beautiful what is in each individual.

I want to thank Carol and  Madame Samm for hosting and cheer leading this Hop.  Thanks for letting me be a participant.

As with most of my quilts there is no pattern or I adapt the pattern.  I designed this to work with color and I wanted the focus to be on the "blues".  I used part of a jelly roll for the blocks and around 2/3 of a yard of brown to do the sashings and borders on the quilt.  I also used different width sashings from top to bottom and left to right.

The entire quilt is free motion quilted on my Juki machine.

I started to use tape for the straight lines and my walking foot does not work properly, so I free motion my quilts.  I had seen examples of long arm quilters using a ruler for straight lines, and knew they had taught themselves to use the ruler, so why can't I do that.  It takes a little focus to hold the ruler and guide the quilt, but once I got started it was super easy.  I love the results. 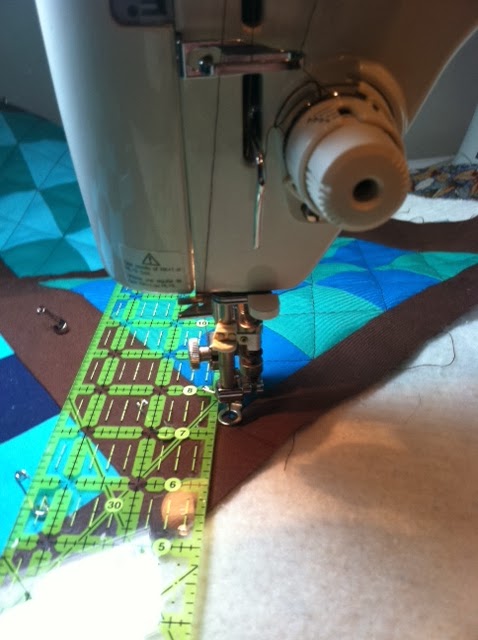 The following is all participants in the blog hop.  Thanks for stopping by and hope to see you soon,

January 14
Sew Peace to Peace
Linda D. (shown on Just Let Me Quilt)
In The Boon Docks
The Cosmic Quilter

Posted by Reneeluvsquilting at 4:44 AM 58 comments:

Are you keeping up with the neat results?  What a great show.


Posted by Reneeluvsquilting at 12:00 AM No comments:

Email ThisBlogThis!Share to TwitterShare to FacebookShare to Pinterest
Labels: Kona, Solids, Wake up to Kona

As the Wake up to Kona Hop continues:

Yesterday was NUTS as far was work was concerned, the number of people with broken water lines was amazing, but we persevered and got the work done.  Now on to today and more normal of a schedule.  No quilting for over 24 hours - WoW!
Posted by Reneeluvsquilting at 12:00 AM No comments:

Email ThisBlogThis!Share to TwitterShare to FacebookShare to Pinterest
Labels: Kona, Solids, Wake up to Kona

Wow!  I loved the finished work done by Day 1's participants in the Wake Up to Kona Blog hop.  If you did not see them (each was totally different), check out yesterday's post and look forward to the remining posts over the next two weeks.

All is well here as far as the weather goes.  We are in the "Northtowns" so the snow we got was recycled over two or three times by now.  My biggest concern was the river that goes in front of our house had an ice jam on it and was potentially going to cause flooding.  We will know the rest of the story as time continues.

Have a GREAT day!

Wake up to Kona